Pages of the story: patches on the uniform

Shoulder patches, buttonholes, eagles, edges, signs of specialists…
Standard patches for private and junior command personnel were made by machine. The sequence of eagles was embroidered on a long ribbon, from which then one eagle was cut off.
The same with the buttonholes, they were woven with reels, and before sewing the tailor cut them, bend them as necessary and sew.
There were also patches, embroidered by hand and/or on the finished molded basis. These stripes were more expensive to manufacture and were intended for officers or for retail sale to soldiers. 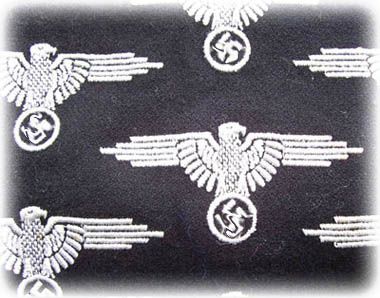 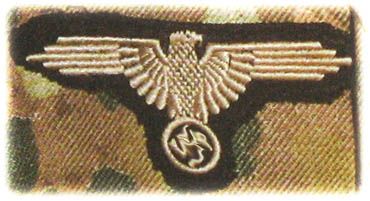 White eagles SS on the canvas and the same eagle, carved from the canvas and sewn on a camouflage jumpsuit SS parachutist SS (rare items, originals). 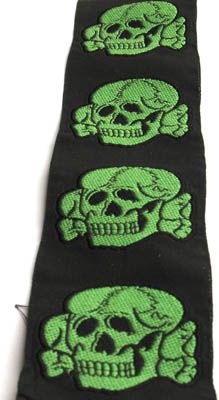 SS Skull Ribbon (copy)
Before the war, it was the norm to sew patches on the finished jacket.
Since the beginning of the war, it was necessary to optimize production - and the patches were sewn on during the production of the jacket.
And at first it was done using partially a sewing machine: one or two straight seams were stitched on a machine, the rest was sewn by hand.
Then the eagle and buttonholes were sewn with a zigzag stitch around the patch or, more rarely, with a regular stitching line. 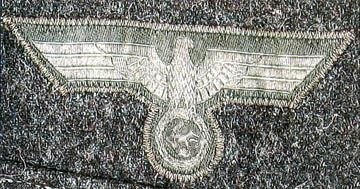 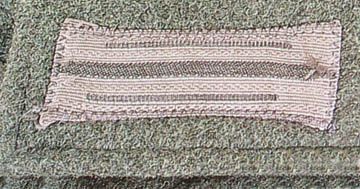 Eagle and buttonhole (produced after the start of the war), sewn zigzag. The eagle is sewn for "indent" in 1 mm. 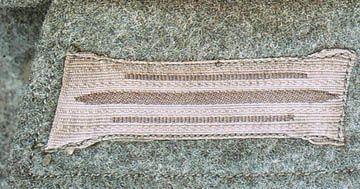 The eagle, sewn up to the assembly of the jacket (the lower part goes under the pocket). The buttonhole sewn with a linear line, the left (actually lower) seam on the buttonhole is hidden.
There were several types of Wehrmacht chest eagles and several types of buttonholes.
Different buttonholes and eagles spawned by attempts to decorate / simplify / disguise the uniform.
These types of patches now differ in the years of their creation, for example, M36 or M40, but in Germany during the war there was no such terminology.
Moreover, there was no hard rules that bind a particular type of patches to a specific model of field jackets.
Naturally, in the black form of the tankers, the eagles were on a black background, and on the feldgrau - on the green, but nothing more.
The manufacturing techniques of the patches differed depending on the circulation.
Senior officers wore hand-embroidered badges (field officers — often stamped out of metal), and rank and file and non-commissioned officers received massive patches.
The Wehrmacht usually wore woven patches (the so-called BeVo style among Germans: a method invented by the French engineer Joseph Marie Jacquard in 1804).
The SS used both BeVo and embroidery (which is coarser and more relief than Bevo, on a piece of thick fabric).
In the Luftwaffe, with rare exceptions, all the patches were embroidered.
In the Wehrmacht and the Luftwaffe there was a certain set of designs that were transferred to various manufacturers for manufacturing.
Therefore, the design of many of the Wehrmacht patches is the same, whether it is the beginning or the end of the War.
Only manufacturers of modern copies do not always carefully approach their work and have produced a mass of unseen samples...
In the SS there were more designs, since this organization was not military, but political, and the quality of the patches was simpler.
For example, the camouflage cap of the SS troops from December 1, 1942 on the orders of the Reichsführer SS carried the symbolism - the eagle and the skull. The patches were sewn right away in the process of making the cap, for the autumn cap — red, for the spring cap — green. It was a matter of the second half of the war, little was taken care of beauty (the caps themselves were already made of scraps of material from blouses and cape tents), the pathces were stuck on a typewriter with coarse squares (see photo), had an ugly design and disgusting quality. Soon the order was canceled, and the rest of the caps went to the troops without patches. And the SS soldiers sewed an eagle and / or a skull or fixed a metal skull on a cap at will.
Another thing is that every reconstruction wants to get the "most beautiful" patch! 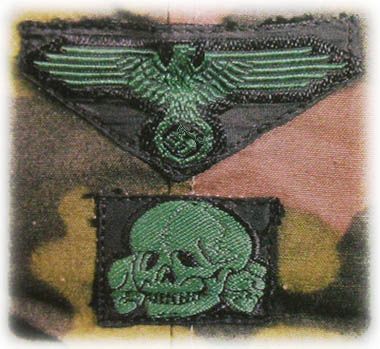 The symbolism on the SS camouflage cap is sewn roughly, not along the contour. On the other hand, the machine run stitch of the “spring” symbolism is superimposed on the line of the “autumn” (original).

Luftwaffe eagle embroidered with silk thread on a piece of gray-blue cloth. An eagle of the Wehrmacht, cut from a ribbon, silver thread (originals).
Based on materials www.replik.ru

This article is in Russian Ukranian German

✉ Department of exclusive orders This email address is being protected from spambots. You need JavaScript enabled to view it.

✉ Industrial embroidery department This email address is being protected from spambots. You need JavaScript enabled to view it.

✉ Main department This email address is being protected from spambots. You need JavaScript enabled to view it.

✉ Common department This email address is being protected from spambots. You need JavaScript enabled to view it.

✉ Site administrator This email address is being protected from spambots. You need JavaScript enabled to view it.